HireMyVa Podcast 7 – Is the language barrier too great for hiring someone offshore?

Listen To The Audio

Dave Braun
00:00:01
Welcome everyone to the HireMyVA team and business building podcast, where we want to help you reclaim your freedom through hiring and thriving with virtual assistants without breaking the bank. And I’m Dave Braun and I’m here with my partner, Larry Broughton. He’s my buddy in this, we are on working this together and we’re having a blast recording these podcasts aren’t we?

Dave Braun
00:00:24
Awesome. Everything’s going great with me, can’t complain at all.

Larry Broughton
00:00:51
You know what the answer is, that’s if you hire someone who does not speak the same language as you.

Larry Broughton
00:01:00
However, there’s a way around it. I mean, it’s a valid concern for sure. There’s a lot of folks who work offshores who have great language skills. They may have an accent, but they have a great language skills. I want to state something though out from the get go though, David, I hope that’s nobody really listened to this, but sadly, there’s a perception among some people, if you’ve not been around people who speak foreign languages, that just because they don’t speak English very well, but they’re not very smart. It’s not the case. Imagine you being transplanted in a country that speaks a different language and you’ve never spoken the language before you are going to feel like an idiot sometimes. And so sometimes what comes across as a little bit of a tentativeness in someone’s voice just means that I’m not that comfortable with the language, but they might be a rockstar in graphic design or computer programming or whatever it is that you need them. And so I just wanted to kind of lay that groundwork first, Dave, before we kind of get into what our process might be to help them in this. So I hope I’m not offending anyone by that, but I do think it just needed to be said.

Dave Braun
00:02:08
Oh, I mean, that’s telling the truth. And a lot of times the same thing goes with people who are in the America who are, have a particular accent, right?The same thing. Sometimes we think that they’re dumb because they have a drawl or they speak funny or whatever. That’s definitely not the case. But so one of the things though, that’s very, very important in the hiring process is to make sure you eliminate those who you are uncomfortable with communicating, you know, and you can do that before you actually talk to them. We have methods and ways to do that. But one of the things to realize is that so many of the folks that are seeking to have a job with an English speaking firm, whether or not it’s Australia or United States or the UK or something like that, there’s a lot of them that are really pretty good with English.

Dave Braun
00:03:01
You know, and I guess the other thing I would say is in fact is, you know, you guys sometimes, we get upset when we are handed off on a call center to somebody from another country. Well, there’s call centers in the Philippine and those folks who work, those are really, really good in English. They really are.

Larry Broughton
00:03:21
Yeah. And don’t be afraid to consider that the folks who you have interfacing with US-based clients are going to need to speak better English than someone who might just be working with you behind the scenes. And it’s just very task oriented. And so you can have varying levels of degree. Like we’ve got multiple VAs that we work with and, or have worked with in those who are dealing with clients, we have higher expectations than those are just dealing with us. And frankly, Dave and I have been working with people from foreign countries who English as a second language for years, particularly me in the hotel industry for well over 35 years. And before that, in the military traveling around the world. So we’ve got people like in my hotel company who speak Vietnamese, Tagalog Romanian, Russian Spanish. And so I have to, my ear has been tuned to deal with accents more than maybe you or someone else.

Larry Broughton
00:04:22
Who’s just not used to dealing with accents. And so it is a skill that you will learn over the years and it’s going to get easier, but you’re just like anything new, cause I know some folks who are listening to this right now have never spoken to, I’m just be honest, you may have never spoken to somebody who were English as a second language where others who might be in a more urban setting, you used to hear an ad video all day long, right? Like walking through the streets of New York in a three block walk, you can probably hear five or six or 10 different languages being spoken. So it’s just part of it. Your ear will get tuned to it over time. But the tips and tricks that we give you through this course will help you identify the appropriate level of language skills before you ever bring them on board cause you’ll set what the expectations are.

Dave Braun
00:05:18
Yeah. I mean, obviously the expectations of the level of English speaking capability is going to be different. If you are expecting your VA to handle some, support tickets, those kinds of things. And it’ll be different depending upon if they are handling them through like a chat bot or through email versus actually, talking to them.

Larry Broughton
00:05:39
So the original question was is the language barrier too great to hire someone off shore. And I joked around in the beginning. Yes. If you’re not speaking the same language, but truly it’s not too great. If you follow the tips and the processes that we provide you right out of the gate to make sure that you are indeed Hiring belief. false a It’s say. they what basically is this think I So people. right the

Dave Braun
00:05:57
Yeah and I mean, absolutely. So the important thing for this is yes, there are times when the language barrier is great, but there’s a lot of times, most of the time when you screen, right, you will get somebody who can speak/write depending upon your needs. And that’s one things you have to talk about and think about is what are your needs? And Larry, we were talking about, you know, like you said, if it’s a graphic designer, if it’s a code or something like that, their level of English may not have to be quite as good as, like we said, some of the writer who needs to be a content writer. So it depends upon what you need, but you can definitely find people who are really, really good at English, from an offshore. English in the world is kind of like the common communication language.

Dave Braun
00:06:54
And most people, especially in the Philippines. What I’ve just learned recently is folks who grow up in the big cities in the Philippines are a lot more comfortable speaking English. And I was just talking to one of my virtual assistants today, Brian, about this. And he said that folks who are in more of the rural areas, they don’t have as good of an education, but they can still understand English really well. They don’t speak it quite as well, but in the Philippines, the big cities, they speak really well. And the VA’s that we’ve worked with speak really well. In fact, they, I think they speak better than I’ll tell you a story one time. Oh my gosh. It was a long time ago. We had some guys come to our company from England that were training us on some technical stuff.

Dave Braun
00:07:42
One of the guys had, what does that accent? That’s a Cockney accent or something from England. And it was really heavy and we had a hard time understanding him. So it’s important for you upfront to, and it doesn’t matter where they’re from, it could be the Philippines, it could be Russia, India. And it’s important for you to make sure that you, you know, filter them upfront to get the level that you need. That’s right. Good. Well, good one. Anything else? Not for me. All right. Sounds great. All right. Well, thanks guys for listening. And we’ve got some great episodes we’ve recorded. Make sure you listen to all of those, but remember building a team is the way to reclaim your freedom. We’re here to help you just go to hire my va.com for more information and how you to connect with us and how that you can even without experience, learn how to prepare, hire, and thrive with virtual assistants. We’re here to help, Larry and I love helping entrepreneurs, helping people grow their businesses and seeing them reach their fullest potential. So folks go to hire myva.com and we will see you next time. Go get them! 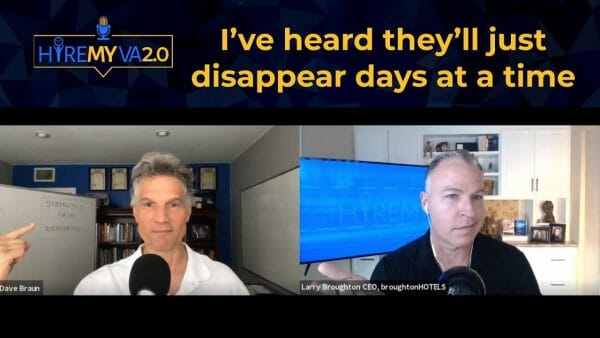 It really comes down to three things. I think one is the personality of the person that you’ve hired. The second, that can be cultural because there are some cultural events or life circumstances that happen where culturally, they deal with it differently than we might here in the U S additionally, part of the cultural thing is the way that they respond differently to their boss versus here in the U S and the third thing is communication. Have we communicated effectively what our expectations are of what happens when some kind of life drama, emergency, tragedy, holiday, comes up? So really, I think comes down to those three things and we can kind of winnow this down from there. 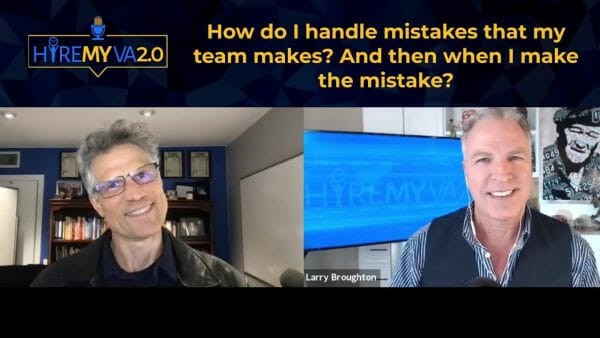 HireMyVA Podcast 37- How do I handle mistakes that my team makes? And then when I make the mistake?

I think Dave, the first thing is just, we have to accept that mistakes are gonna happen because we are dealing with humans and we are humans. Mistakes are going to happen in business and so we have to learn some tolerance around mistakes. The second thing I would say, and this has to do, particularly for us is that we have to develop a culture where our team members, including ourselves, accept responsibility when they make a mistake. 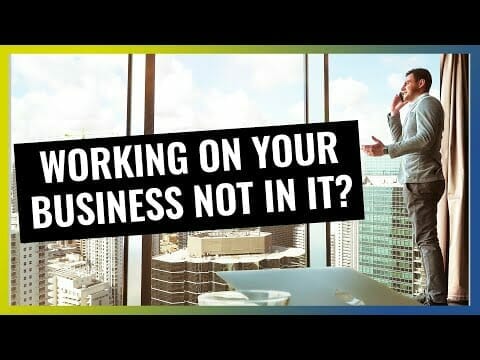 HireMyVA Podcast 122- Working on your business not in it?

I was going to say there’s a mindset issue with this as well, because a lot of times when you’re doing the strategic thinking, the long-term thinking, thinking of new offers, and we’re going to give you some examples of that other than new offers, but you are not getting like that much of a dopamine hit. You’re not getting to where you’re checking something off on your list. When you’re acting as a tactician, as a team member, you’re, you’re in the, you’re down in the dirt, executing, getting stuff done. And sometimes that feels really good. Yeah. And when you’re more doing the strategic, it’s harder to feel like you’re getting stuff done.